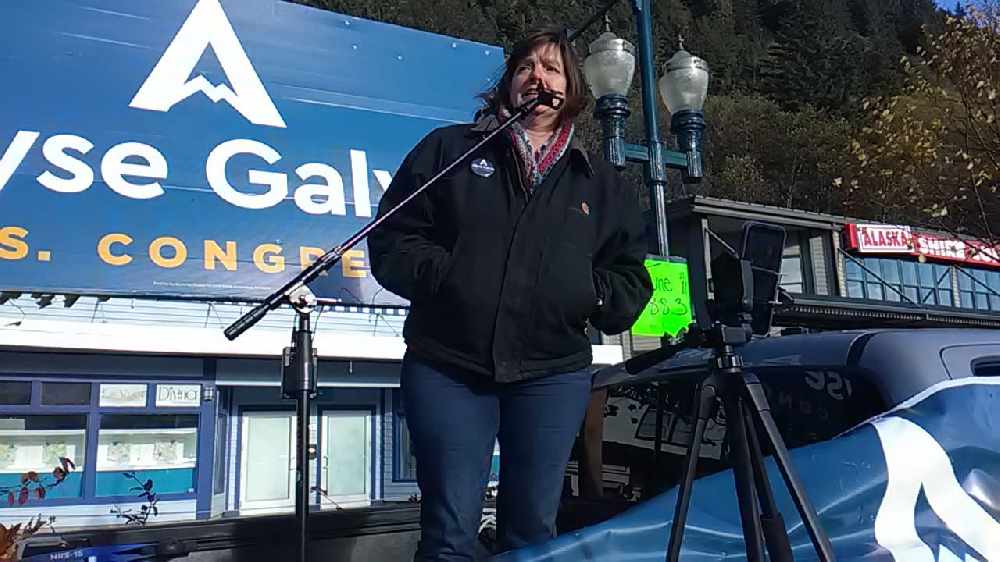 Juneau, Alaska (KINY) - Congressional candidate Alyse Galvin spoke in Juneau on a cold and windy Saturday as she held a virtual drive-in rally in downtown.

The rally was socially distanced, with Galvin making remarks via a low-power FM radio station to those parked at the event or driving by.

Galvin spoke exclusively to News of the North at the rally. She explained why she held the speaking engagement.

"We're here to light the fire among all the voters and make sure that they know that there's a really great campaign happening," Galvin said. "[It's a] good chance for change for Alaskans. It's historic and I'd like to make sure that every voter understands the power of their vote."

Galvin said she is feeling optimistic at this late stage in the Congressional race against incumbent Don Young.

"I'm feeling inspired to work harder," Galvin said. "We know that it's neck-and-neck, so depending on who's poll you're looking at out there, there's one out of New York that puts us down, one out of Alaska that puts us up. To me, with the polls, the bottom line is it's a dead heat and we've got to do everything we can for every vote."

And Galvin made a distinction between her and Congressman Young, should she win.

"I'll be here ... I'll show up," Galvin said. "I am showing up and have been showing up for years. I won't stop. It's important that we have inclusivity when big projects are coming into play, and we've got to get back to work. I'm going to be in Washington fighting and I'll be in a position of power, unlike my opponent, who unfortunately no longer has any opportunity for any position of chair and he's in the minority. He will be out in the hallway shouting at everybody calling them all socialists."