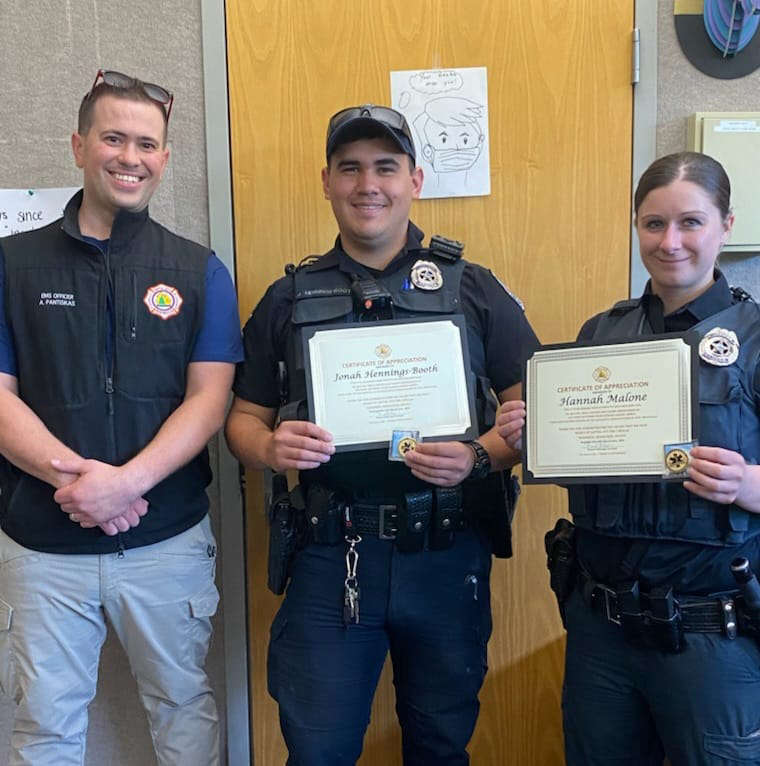 Juneau, Alaska (KINY) - Four emergency responders in Juneau received coins last week signifying a successful CPR rescue in response to a patient going into cardiac arrest, and Fire Chief Rich Etheridge said the coin is part of an effort to increase CPR save rates in the capital city.

On Thursday, Officers Hannah Malone, Jonah Hennings-Booth, and Dispatchers Tonya Kurtz and Alicia Cheeseman, were awarded a cardiac arrest save coin for their efforts during a recent cardiac arrest.

Chief Etheridge said on Action Line that when he first started in the department, they have been working to increase CPR save rates in Juneau.

"So we created this CPR save coin, in that if people stop and choose to do CPR and help save a life, they get a coin for that," he said. "A gentleman in one of the trailer parks out in the valley had a cardiac arrest and one of his family members started CPR, and then all of the responders that go and participated in that along with the police officers that are first on scene. Anybody that participates in saving that life gets a challenge coin."

Etheridge said that the bar is high to receive the coin, requiring that the individual rescued is not only delivered to the hospital with a pulse but also discharged and able to resume their life.

Etheridge said that the department is at about a 55% save rate for people that go into cardiac arrest.

"I think it's the easiest way to measure performance. When I started, it was really, really rare to save someone doing CPR, now we're saving 55% of them," he said. "It's an amazing milestone."

Etheridge said they go in with the attitude that they are going to save everyone.

"We definitely want to make that save, because everybody we do CPR on is somebody's family member, they're somebody's parent or child, and we want to be able to have them come back home to them."