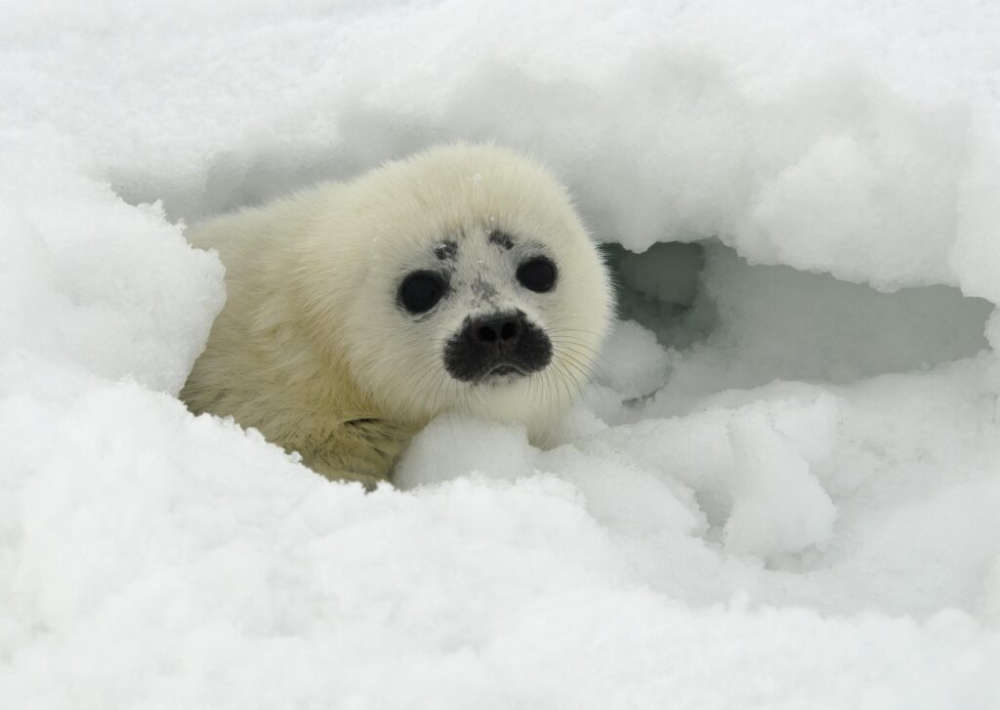 A ringed seal pup peeks out from its protective snow cave near on sea ice near Kotzebue on May 1, 2011. Ringed seals depend on sea ice and on snow atop that ice. (Photo by Michael Cameron/ NOAA Alaska Fisheries Science)

The lawsuit was filed Nov. 16 in U.S. District Court in Anchorage. It follows an unsuccessful attempt in 2020 to convince the National Oceanic and Atmospheric Administration’s National Marine Fisheries Service to delist ringed seals administratively.

“NMFS’ decision to list ringed seals was not a rational application of the Endangered Species Act,” Alaska Department of Fish and Game Commissioner Douglas Vincent-Lang said in a statement.

The lawsuit is seeking to compel the NMFS to move forward with the delisting process to remove the threatened designation, Senior Assistant Attorney General Ronald Opsahl said by email.

The agency’s threatened listing for Alaska’s population of ringed seals was granted in 2012. Also granted Endangered Species Act protections then were bearded seals and, in 2010, a non-U.S. population of spotted seals.

The listings and critical habitat designations followed a lengthy legal administrative and legal process that started with listing petitions filed in 2008.

Through those years, the state, North Slope Borough, oil industry and others have been working to prevent or overturn those listings, with last week’s lawsuit as the most recent step.

In the lawsuit, the state and borough argue that they have suffered “actual, concrete injuries” as a result of the listing. Those include interference with oil and gas activities, mining and mineral production, navigational dredging, construction activities, commercial fishing and subsistence hunting and fishing, the lawsuit said.

It contends that NMFS has used flawed reasoning concerning a Bering and Chukchi ringed seal population that numbered 470,000 as of a decade ago, the lawsuit said. The listing was approved and upheld despite “the Arctic ringed seal’s extremely large population and circumpolar range, as well as its documented resilience to historical habitat and climate variation,” the lawsuit said.

The lawsuit concerns only ringed seals, even though the state has attempted to overturn the bearded seal listing and the designation of bearded seal critical habitat. Unlike the case with ringed seals, “The State has not submitted a delisting petition for bearded seal,” Opsahl said.

A NOAA spokesperson said the agency declined to comment on the lawsuit.

There have been signs of trouble for ice seals in the Bering and Chukchi seas. Hundreds were found dead on beaches from 2018 to 2021 in what has been officially classified as an “unusual mortality event.” Scientists have cited warmer marine conditions as a possible factor.

Recent research has shown that various types of Alaska seals are being affected by climate change.

A 2021 study by scientists from NOAA’s Marine Mammals Laboratory in Seattle found that rapid iwarming in the Bering Sea has resulted in poorer body conditions for ice-dependent ribbon and spotted seals, as well as for harbor seals in the Aleutians Islands region.

A newly published study by other scientists from NOAA’s Marine Mammals Laboratory and the University of Washington found that bearded seals have shifted their distribution and changed their behavior in a region where sea ice is diminishing. That study used acoustic devices to track the seals’ movements through the seasons from 2012 to 2016.