Update: Sunday evening fire that was put out quickly by CCFR determined to be unintentional 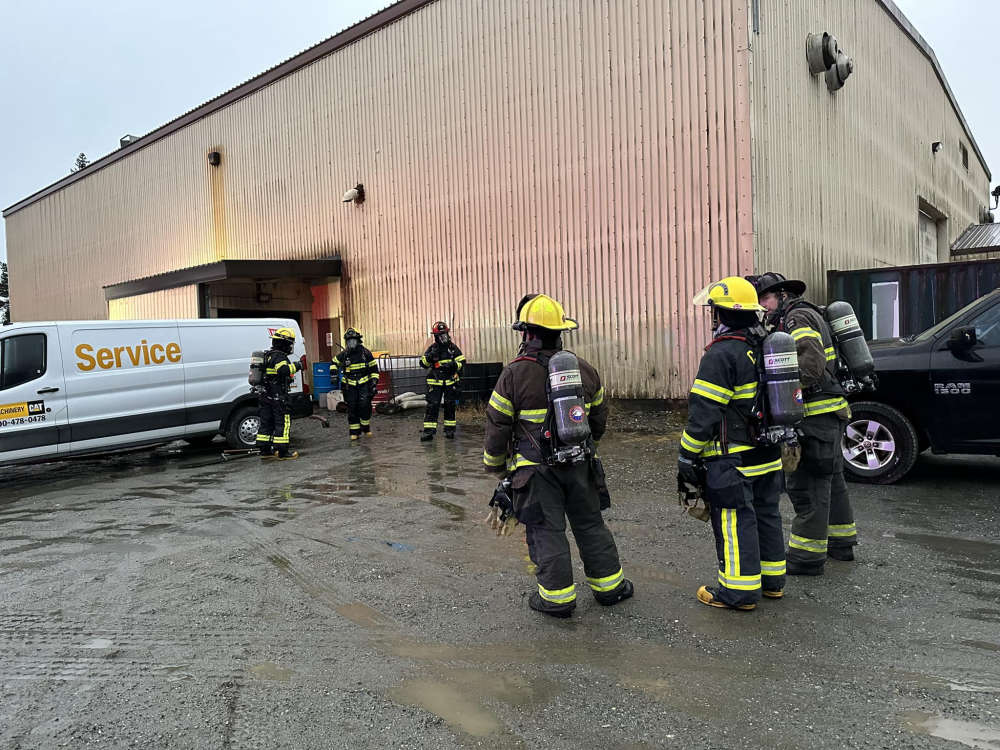 Juneau, Alaska (KINY) - Capital City Fire and Rescue (CCFR) responded to NC Machinery for a working fire in a structure in the back of the building Sunday.

Update 01/25/2023:
The fire origin and cause investigation for a fire that occurred on Sunday January 22, 2023 at the NC Machinery business is determined to be unintentional in nature.

The room of origin is a separate structure that is located on the backside of the business.

This room contained the used oil transfer pump for the heater units that are used inside of the main warehouse. The fire was contained to this space and was quickly extinguished.

The potential cause for this fire is believed to be related to an electric space heater that was in use that was connected to an extension cord.

There may have been resistance heating caused by the electrical draw from the space heater that over time may have caused a breakdown in the extension cord protective sheathing.

Once the sheathing melted and ignited, the wires may have made contact creating a spark that ignited nearby combustible materials.

CCFR would like to give thanks to NC Machinery staff who did the right thing. Once the fire was discovered, they chose not to open a large door to the space which could have increased the fire by introducing more air into the space and cause more damage.

They called 911 immediately and made sure nobody was in the area.

CCFR would also like to remind everyone that extension cords are only intended for temporary use.

Using an extension cord of any size is not recommended as they may not be rated for extended use and may not be heavy enough gauge wire to handle large electrical current draws depending on the appliance in use. If prolonged use is anticipated, it is better to have a qualified electrician provide permanent wiring to be used instead.

Engine 11 from downtown established a water supply for the fire attack team.

No injuries were reported.

Assistant Chief Travis Mead assumed command of the incident. He spoke with News of the North.

"The units were paged out for a report of a possible structure fire in NC Machinery this evening. First arriving engine got on scene and confirmed that it was a working fire in the back area of the structure. They immediately went to work with an attack line and quickly got a quick knock on the fire. We spent the majority of our time just making sure that it was out and overhauling to make sure that it was extinguished and there was no extension into the remaining of the structure. At this time, it's under investigation, and appears like most of the damage was contained to one area of the structure, an outside attached shop area. The business should not be affected, it should be able to open up as normal tomorrow."

It took about 15 to 20 minutes to extinguish the fire. When a fire is reported in an early stage before it's out of control, it can make a huge difference in the outcome, Assistant Chief Mead said.

"I believe it was discovered by an employee that happened to stop by work. Because it was in the vicinity to the station and because the crew happened to be not on another call, there was a really quick response time. A very quick water-on-fire time from our arrival of the first unit. A few minutes longer and that fire could have escaped that compartment and spread to another area of the structure. It could have been a whole different situation. Crews did a fantastic job."