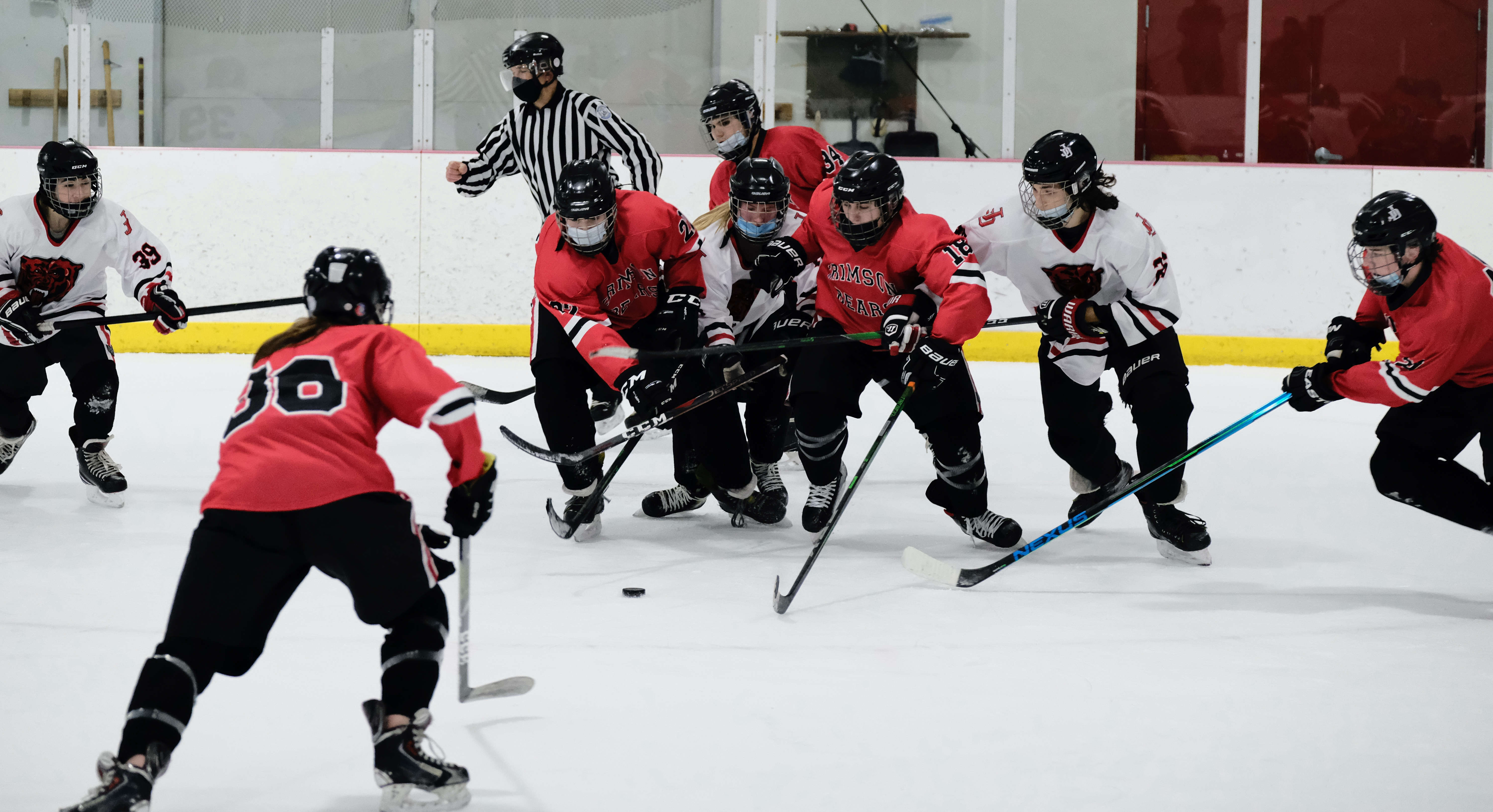 The Juneau-Douglas Crimson Bears, shown in scrimmage action earlier this season, played at Homer and Kenai over the weekend and will host Kodiak Friday and Saturday at Treadwell Arena. (Klas Stolpe)

Juneau, Alaska (KINY) - One night after skating to a 2-2 tie in an overtime game against Homer, the Juneau-Douglas Yadaa.at Kalé Crimson Bears dropped a 4-3 rematch against the Mariners on Friday and then dropped a 5-4 game in overtime at Kenai on Saturday.

Juneau broke the ice against Homer with Colton Johns scoring at 12:30 of the first period with assists by Cody Roomsburg and Ian Moller.

Homer tied the game at the 6:00 mark of the period with a goal by Matfey Reutov, assisted by Brock Barth.

Juneau pulled within 3-2 as Sonny Monsef scored at 11:31 of the third period, assisted by Fin Shibler and Andre Peirovi.

Homer took a 4-2 advantage at the 2:36 mark on a goal by Barth, assisted by Owen Pitzman and Hunter Green.

Brayden Baxter stopped 25 shots on goal for the Crimson Bears and Keegan Strong stopped 31 for the Mariners.

Juneau then played at Kenai in another fast and physical game.

Kenai scored first at 13:47 of the first period with the Kardinals Jacob Begich going unassisted.

Juneau tied the game at the 7:03 mark of the first period on a goal by Peirovi, assisted by Joey Meier and Dylan Murdoch.

Kenai took a 2-1 advantage at the 3:19 mark on an unassisted goal by Reagan Graves.

Juneau tied the game at the 12:52 mark of the second period on a goal by Moller, assisted by Camden Kovach and Meier and took a 3-2 lead at the 6:44 mark on a goal by Meier unassisted.

Kenai tied the game at the 5:24 mark of the second period on a goal by Begich, assisted by Caden Warren.

The Kardinals took a 4-3 lead in the third period when Warren scored at 12:02 assisted by Daniel Sheldon.

Juneau tied the score with a goal by C. Johns unassisted at the 3:46 mark but ran out of ice time and into overtime.

Sheldon scored at the 6:00 mark of overtime for Homer, assisted by Logan Mese and Begich, and Juneau could not answer.

Mason Sooter saved 30 shots on goal for the Crimson Bears and the Kardinals Carson Koppos 32.

Kenai had penalties of interference and slashing and two tripping calls in the first period, and crosschecking in the second and third periods.

Juneau will host Kodiak at Treadwell Arena at 7:30 p.m. Friday and Saturday.