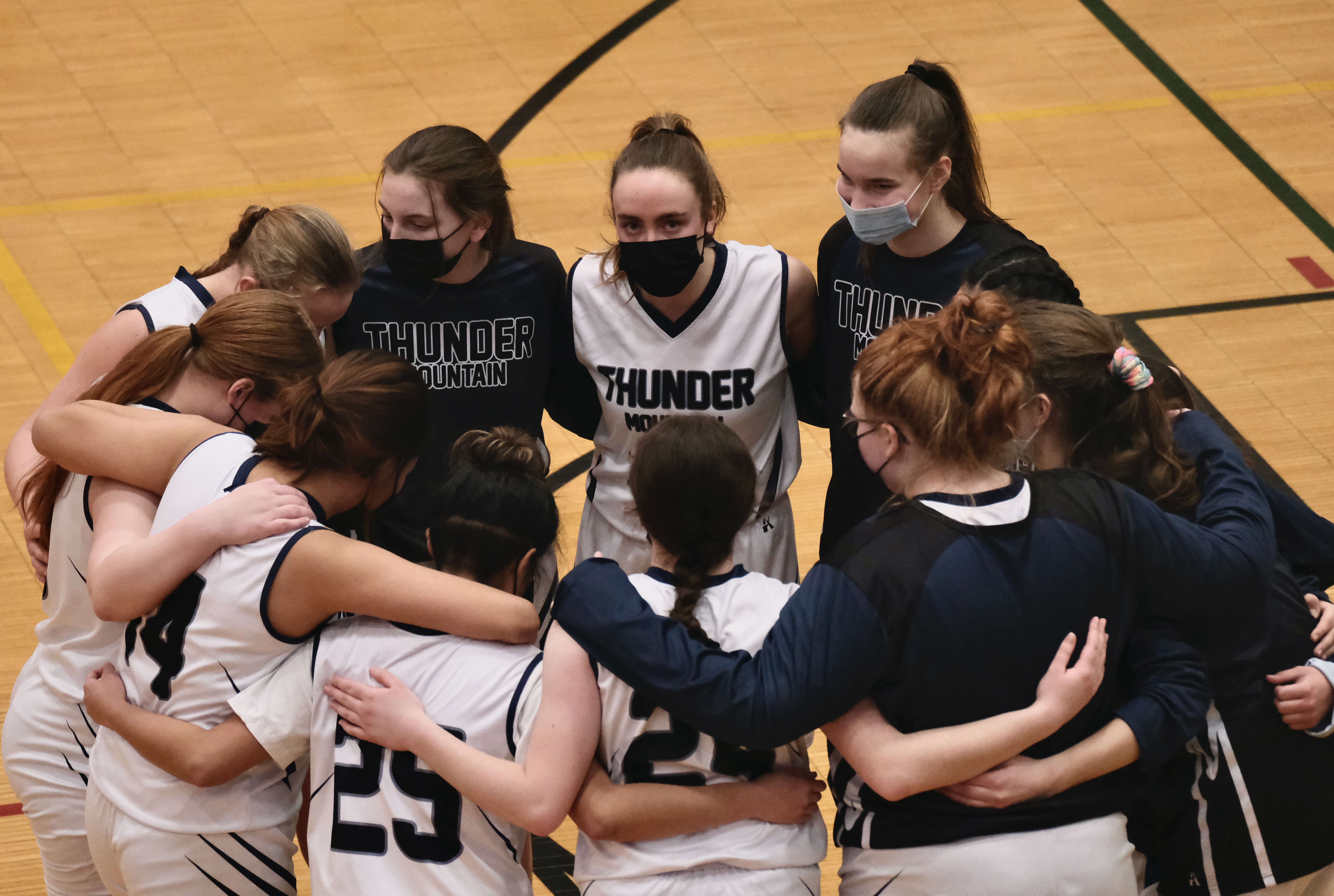 The TMHS girls are shown in a huddle at the Capital City Classic. The Falcons played well at the Palmer Elks Showdown this weekend. (Klas Stolpe)

Juneau, Alaska (KINY) - The Thunder Mountain High School girls basketball team wrapped up another hard-fought weekend on the road, finishing the Palmer Elks Showdown Tournament on Saturday in a 54-39 loss to the East Anchorage Thunderbirds.

"In total I thought that we had a good tournament," TMHS coach Andy Lee said. "We're about development and reaching our potential and sometimes we are a little bit impatient with the number of freshmen and sophomores we have playing major roles. There are some days that they play like seniors and there are some days that they don't. I thought we had some good learning opportunities today."

The Falcons girls had another strong showing, and continue to improve, but fell to East Anchorage in another physical game that saw Thunder Mountain get out to a slow start.

"We took a tough loss today," Lee said. "They were more physical, they were older, they were more mature and at times during the game they imposed their will on us. But we kept making runs. They got a big lead, we would cut it down. We had several chances to get it to five or six points. We just missed critical free throws or turned the ball over at tough times. But we had the opportunity to win that game."

East led 15-5 after eight minutes of action as the Falcons inside game of senior Sydney Strong and freshmen twins Kerra and Cailynn Baxter scored.

Five Falcons found the net in the second quarter as Thunder Mountain outscored East 19-17 behind the outside shooting of junior Kiara Kookesh and inside work from K. Baxter. The Falcons trailed 32-24 at the half.

Another slow start to the second half saw the Falcons put just two free throws in the net and trail 44-26 heading into the final eight minutes.

Strong had her namesake work ethic in the fourth quarter, battling for five rebounds and scoring eight points in the stanza, and the Falcons outscored the Thunderbirds 13-10 but fell short in the final tally.

"I am pretty pleased with our overall performance," Lee said. "The East game was the hardest matchup for us. They are not only some of the best athletes we have played but they have the attitude and the swagger that goes with having confidence in your athleticism and your skills. So they came out to impose their will on us. And once we got punched in the nose, you have to watch to see how your team will respond, and I liked the way we got off the deck - in all three games. We had to come back in every game. We played better in the second quarter of every game and we played better in the third quarter.

The Falcons girls lost to Palmer 61-50 on Thursday and defeated West Valley 55-45 on Friday.

"We ran up against three really different teams up there," Lee said. "One from each of the other three conferences. So now we have a sense of Palmer and West Valley from the valley, East from the CIC in Anchorage. We know that we are in a very tough conference. But because the kids haven't had great middle school experiences, they haven't played a lot of basketball around the state. This was a great opportunity. We are at game nine and we have played the number one team in the nation, we've played teams from every conference in the state, and now it is what we do with that knowledge and does it fuel us to get better to get to where some of these teams are."

Thunder Mountain has an overall record of 4-9, with no Southeast Conference games played yet. The Falcons will host Colony High School Friday and Saturday.

"And Colony is good or better than most of the teams we have played," Lee said.