Nadal, Others on Djokovic Saga: ‘Bit Tired of the Situation’ 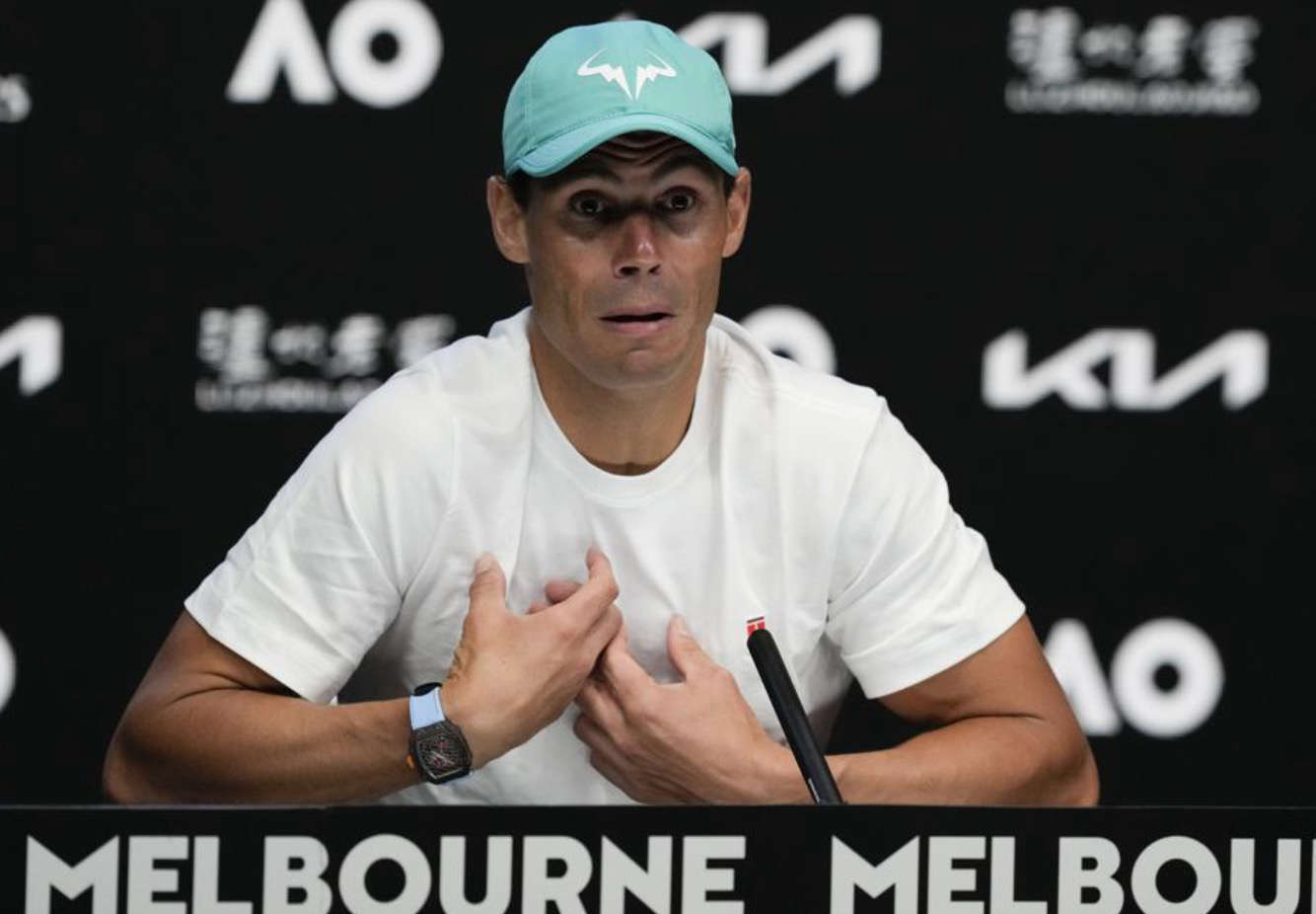 Spain's Rafael Nadal gestures during a press conference ahead of the Australian Open tennis championships in Melbourne, Australia, on Saturday. (AP Photo/Simon Baker)

MELBOURNE, Australia (AP) — Rafael Nadal’s first Grand Slam match in more than seven months is on the horizon, he is coming back from a painful left foot problem that limited him to one tournament over the last half of last season and he got COVID-19 in December.

Plenty to talk about, right? This is, after all, the owner of 20 major championships and one of the most significant figures in the history of tennis. His mere presence at an Australian Open pre-tournament news conference Saturday was newsworthy — or, rather, would have been on pretty much any other occasion.

Ah, yes, the run-up to this Australian Open has been, and seems destined to continue to be, all about Novak Djokovic and his hopes of defending the title at a vaccination-required competition while not being vaccinated against the coronavirus. So Nadal’s words and body language spoke for many in the world of tennis when he shrugged his shoulders, exhaled and uttered this about his long-time rival’s will-he-play-or-won’t-he saga: “Honestly, I’m a little bit tired of the situation.”

“All this could have been avoided, like we’ve all done, by getting vaccinated, doing all the things we had to do to come here in Australia,” said two-time major champion Garbiñe Muguruza, a 28-year-old from Spain who is seeded No. 3 in the women’s bracket. “Everybody knew very clearly the rules. You just have to follow them and that’s it. I don’t think it’s that difficult.”

For now, the No. 1-seeded Djokovic is scheduled to play Monday on Day 1 of the year’s first major tournament, where both he and Nadal could claim a 21st Grand Slam trophy to break the men’s mark they currently share with Roger Federer.

Before that, though, Djokovic — and, it seems, everyone else with any interest at all in tennis or the latest developments related in some way to the pandemic — will wait to see what happens in a court hearing Sunday on his appeal of a second revocation of his visa by the Australian government.

He could be deported.

“I won’t lie: It has been pretty much on every news outlet the last couple of weeks. It has received a lot of attention. A lot of people are obviously talking about it,” said Stefanos Tsitsipas, a 23-year-old from Greece who is seeded No. 4 at Melbourne Park and was the runner-up to Djokovic at last year’s French Open. “That’s why I’m here to talk about tennis. ... Not enough tennis has been talked about in the last couple of weeks, which is a shame.”

Usually, the Australian Open — known as the “Happy Slam” — serves as a sort of celebratory launch of a new tennis season.

Players are coming off a chance to rest, recharge and prepare during the offseason. They have a clean, or mostly clean, slate, depending on whether they played any tune-up matches. Some show up with wrinkles in their playing style. Some arrive with a new coach, eager to see how the relationship might work out.

“It feels like it’s taking away from us competitors who just want to start. We’re just eager to go out and compete. The Australian Open is always an incredible event, my home Slam, my favorite tournament,” said No. 32-seeded Alex de Minaur, a 22-year-old Australian. “At the end of the day, tennis is an individual sport, and we’ve all been here in Australia for a while, getting ready for this tournament. We all just want to get on with our own stuff.”

Story lines and areas of intrigue tend to be plentiful in Melbourne. As it is, this time was destined to be a little different, given the noteworthy players who are absent for one reason or another, including Federer, Serena Williams and Venus Williams.

But Nadal’s return to Slam action for the first time since a semifinal loss to Djokovic in Paris in June is a big deal.

So, too, is defending Australian Open champion Naomi Osaka’s arrival with what she says is a fresh outlook after taking two mental health breaks in 2021, including one that ended her season in September.

Given Osaka’s frank revelations about depression and anxiety, it was meaningful Saturday when she broke into a full-on grin. When she joked around with reporters. When she appeared comfortable as can be.

As did Nadal. He’s said he’s thrilled to be back on tour. Has been practicing well. He mentioned his “positive attitude” and “working spirit.”

Only when the topic was Djokovic did Nadal sound less than excited.

“I wish him all the best. I really respect him,” Nadal said about someone he’s played a tour-record 58 times dating to 2006, “even if I (do) not agree with a lot of things that he did the last couple of weeks.”